Searching for the Perfect Gun by Rob Morse 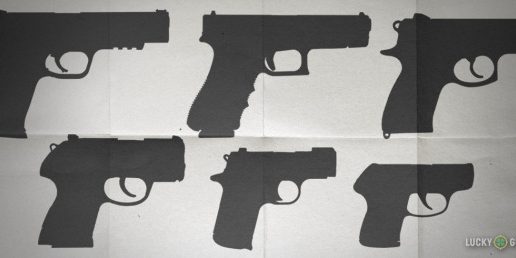 We quickly find out that we want a heavy gun because it is more comfortable to shoot. The weight of the firearm helps reduce the felt recoil as the gun fires.
We want a light gun because it is easier to hold at arm’s length as we shoot. It is also easier to carry a light gun rather than carry a heavy lump that constantly tries to pull your pants down.
We want a large gun because we can shoot more accurately when the sights are farther apart. A large gun also wobbles less as we try to hold it steady.
We want a small gun because it is easier to carry concealed.
We want a trigger that is easy to press and has a short motion. That is a target trigger that we can shoot accurately.
We want a trigger that is heavy and requires a moderate amount of motion so we won’t fire the gun by accident. That is a trigger designed for a gun that is carried concealed.
We want a simple firearm that doesn’t have a manual safety. That means we have to train to use that simple firearm safely.
We want a gun with a manual safety so we won’t fire the gun by accident, but that means we have to train ourselves to deactivate the safety as we draw the gun from the holster.
We want an inexpensive gun so we can have more money left in our budget for training and practice.
We want a finely crafted gun so the shooting experience is more enjoyable, but that costs money.
We want a gun that is tailored to fit our hands rather than fit the average shooter.
We want an extremely reliable firearm, but that usually means leaving the gun the way the factory built it.
We want a gun that fires small bullets because that ammunition is less expensive and more comfortable to shoot.
We want a gun that shoots large bullets because they are better for self-defense.confused woman
We want a gun that only holds a few cartridges because that is lighter, smaller, and more reliable.
We want a gun that holds many cartridges because that gives us more fun between reloads, and more cartridges are better for self-defense.
We haven’t even described how we want the gun to look. Do your tastes run to chrome, or camo, or colors?

There are other examples, but let’s compromise and stop here.

We are the problem. We want all these things. We want one tool for many uses, and I’m as guilty as the next person. Part of our problem is in the language we use. We really need more words than “gun” to describe the many tasks a firearm can fulfill. Is your “gun” for instruction, for practice, for competition or for self-defense? There are too many applications for a single tool to fulfill them all. We need more words to describe what we want to accomplish.

We were smart enough to have different names for different breeds of dogs. We don’t confuse a beagle with a husky. Then again, we’ve lived with dogs for thousands of years. Maybe it is too soon in our history with gunpowder to know what guns should be called. Maybe we’ll develop new names for these different breeds of firearms given enough time.

We can’t blame new gun owners for being confused. It isn’t their fault. Beginners don’t know what they don’t know. They want one gun to do everything. I do too, and I know better. All I can say is it gets better with experience. It isn’t that we become more realistic over time, though I wish that were the case. I’ve simply grown more accepting of my contradictions as I continue to want the grand compromize.

At least we keep salesmen busy as we search for that perfect compromise that gives us everything we want. If we were more honest, we’d admit that we are selling a new gun buyer their first gun.. rather than their only gun.

We must drive sales people crazy as we sort out our wants across their counter.

Go ahead and share this with a new gun owner.

From NightHawk Customs and Agency Arms-The NightHawk Agent 1
May 1, 2017
Categories
Go to Top