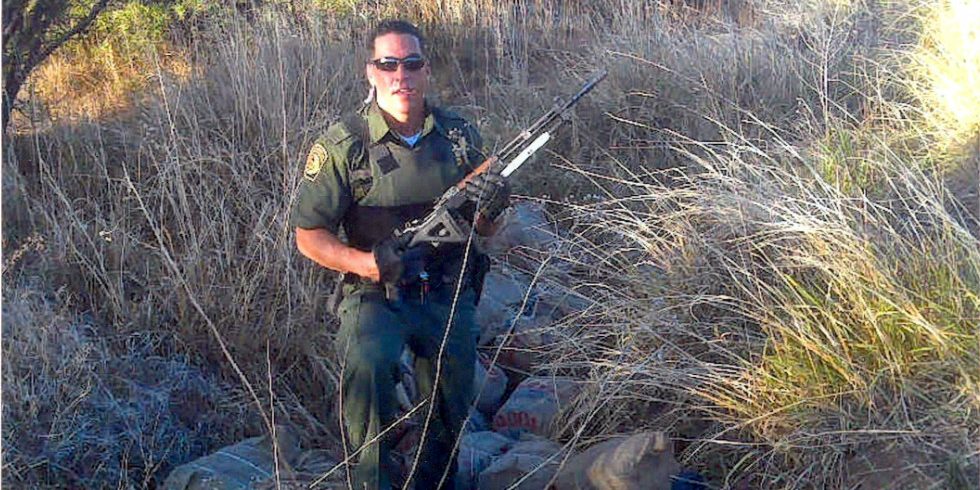 I write to you today to protest a great injustice.

For over four and a half years, my family has patiently waited for you and your fellow representatives in the government of these United States to produce results in the investigation pertaining to the murder of my brother, US Border Patrol Agent Brian A. Terry, and the US Government-sponsored operations that assisted in his death. Brian was killed in the darkness of the Arizona desert at the hands of Mexican drug cartel members operating miles within our own border bearing arms supplied by the dubious results of political agenda designed to vilify the second amendment.

Since his death in 2010, members of our own government, to include high-ranking members of federal law enforcement agencies have colluded in efforts to cover their criminal involvement by hiding the truth from the American people. As of the writing of this letter, no member of any government agency has been formally admonished or held criminally liable for what has been one of many recent criminal scandals against the citizenry of this great nation.

It was not until well after Brian was murdered that we learned of OPERATION: FAST AND FURIOUS through the courageous efforts of individuals who would not stand idly by and watch a skewed political agenda govern federal law enforcement activities at the cost of what has now been the lives of at least two federal agents and hundreds if not thousands of Mexican nationals.

From the very beginning, Key members of the current administration as well as leadership at the Bureau of Alcohol, Tobacco, Firearms, and Explosives (BATFE) have looked my mother and father in the eyes and lied to save their very skin.

On the last visit home that Brian made in the Fall of 2010, he stated that things were getting worse down on the border and that he believed, “Something bad is going to happen.” Sadly, he could not have been closer to the truth.

After Brian’s death, our family met with members of the USBP Union on the conditions of anonymity. Behind closed door and drapes, we were informed that in the weeks leading up to his murder, Brian had sent three emails to the union over concerns that were not regarding “standard” USBP issues. We were informed that they were, “Throwing us a bone,” and that, “They were never here.”

Shortly thereafter, my father notified the head of the investigation, Dennis Burke about the communication between Brian and the union. It was then that federal agents made entry into Brian’s home, seizing his personal electronics and personally-owned weapons without warning or permission. The electronic devices were returned to our family, wiped clean of any data and Brian’s personal handguns have still not been returned to this day. Brian’s personal cell phone, although, “Undiscovered” by investigators, remained active for over a year. We still have not been provided the warrant, legal writ, or any other associated documentation as to why Brian’s house was searched and his personal belongings taken and altered against our wishes.

The United States has currently tried and sentenced only one foreign criminal for actions related to Brian’s murder. The trial of this individual was closed to our family and to the public, and all records have been sealed. Although two other foreign nationals are currently in custody awaiting trail, we can only expect the same lack of transparency in their court appearances as we have received from our government since the very beginning of this ordeal.

Mr. Senator I am deeply concerned. We the people of the United States are witnessing ever more increasing displays of despicable behavior from those that sit in positions of great power in this country. It seems that those who took an oath to protect the Constitution of the United States and it peoples have traded their responsibilities for that of their agendas.

With the departure of Director B. Todd Jones following one-to-many cases where the BATFE over-stepped their authority with the goal of criminalizing legitimate enterprise, businesses, and responsible citizens to fulfill a self-serving need, it is important that competent and truthful leadership be put in place should the agency hope to gain the trust of those they answer to.

Agent Thomas Brandon is not that person.

Agent Brandon was the individual responsible for seeing that those who had a role in the illegal activity that directly contributed to the death of my brother and so many others be held accountable. He made claims and promises that he would ensure that such individuals would never work in law enforcement again. To this day, he has not collected a single badge as all parties involved were merely moved from their duties to another station and position.

Brian Terry and Thomas Brandon are Marines. They are expected to live by a code of Honor, Courage, and Commitment. My brother gave half of his short life in service to his country as a Marine, a dedicated law enforcement officer, and as a Agent with the US Border Patrol. He died living that code. Others continue life without honor.

I would ask any who would hear these words read aloud, have the actions of this government, the BATFE, or of Agent Thomas Brandon met the standard of what we the people should demand of those who wield such power?

I thank you for your time on this matter. I can only hope that one day, my family receives the answers and justice that all of us deserve.