Why the 1911 for Everyday Carry, Advice from Crusty Old Marine Veteran 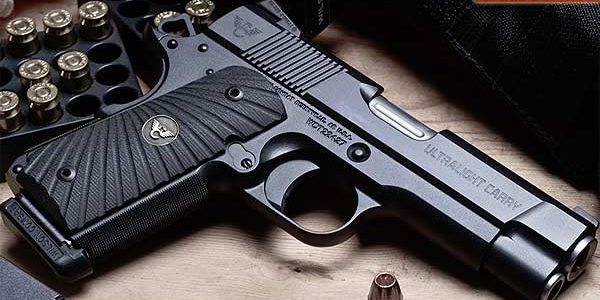 West Palm Beach, FL –(Ammoland.com)- In this day and age there is a much larger selection of different size and shape handguns then ever before in history.

Ask a hundred instructors what the best gun for concealed carry and you may get a hundred answers. And every one will have objective, subjective and fact based reasoning.

Fifty years ago, there were not so many selections to pick from. Back then, you had revolver fans and then semi-auto fans.

In revolvers, there were Colt (Cobra, Trooper and Python) or Smith & Wesson (J-Frame or K-Frame). In semi-autos, it was Colt 1911s or Browning Hi-Powers. There were very few other firearms that supplied the reliability, parts availability or service availability. These were the standard for military, Leo and civilians.

Revolvers have become a sort of ugly step sister in everyday carry due to capacity. Although, many including myself, use them for our backup guns.

Back in the 1890’s the semi-auto pistol was in its infancy. John Browning was in the development of his semi-auto pistol which came to be known as the 1911. Hiram Maxim invented the blowback design semi auto rifle which is the founding father of our current semi autos.
DWM Luger pistols

Militaries became infatuated with the design and put out a request to different manufacturers for a combat pistol that was semi auto loading. During the same time frame DWM supplied the US government with 100 DWM Luger pistols. They were chambered in the 7.65 Luger.

During testing there became a serious problem with stopping power and other complaints. DWM then came out with the 9mm parabellum cartridge. DWM then reapplied to the US Army with 50 of these rechambered guns. Following the problems found in the Philippines during this time frame, the US Army found that the smaller calibers were underpowered for the rigors of war against the Moro tribesman. The Army then changed their requirement to a pistol that should not be of less than .45 caliber.

So you see, the 9mm or .45 arguments have been around for over 100 years. And you thought you were the first to have a barroom brawl over caliber size.

I started carrying a Colt 1911 in 1973 while in the Marine Corps. In 1976 I became a Primary Marksmanship Instructor at Quantico’s Weapons Training Battalion in Virginia. One of the things that impressed me the most about these pistols, the reliability of being fired day in and day out without major malfunctions.

I became convinced that the 1911 pistol was the most reliable, hardest hitting and most simplistic of designs at the time.
Essex frame 1911 pistol

My first carry model, was a custom Essex frame 1911 pistol with Bar-sto barrel and Bomar sights. This gun was built by the armorers at WTBN Quantico. They built me a pistol that was worthy of competition yet had the deburring of a carry gun. This gun stayed with me day in and day out for almost 10 years. I carried it in a Sam Andrews leather OWB holster. This gun now resides retired in my safe. I have been carrying a Colt Officers Model for over 20 years and we will go in to reasons why….

The answer is so simple, more than most can comprehend. In this day and age, the internet will give you all the information you can use in the purchase of a carry firearm. You can search, caliber, size, reliability, parts availability, holster selection, spare magazines…..You name it.

Here are my requirements:

1 Reliability- The gun is worthless if it doesn’t go bang when I need it to. The 1911 is a proven design to me with 10’s of thousands of rounds down range.

2 Concealability- The Colt 1911 and its offshoots have the thinnest overall width of 9mm or .45 caliber that I have seen. Most people think that length is the determining factor of concealability, it’s not. The thickness of the gun dictates how concealable the gun is. At a slide width of .916” and a grip width of 1.27”, you will be hard pressed to find a gun that is easier to conceal. In a good IWB holster the gun almost disappears.

3 Size and Weight- At 8.27”inches in overall length and 5.8” in overall height the gun is slightly larger than your hand. That is the dimensions of a full size. The Commander and Officers Model are shorter overall length. Coming in at just over 3 lbs. loaded the gun can be easily supported with a strong belt and holster system.

4 Accuracy- There are few pistols that can compete with a tuned 1911 when it comes to putting shots on target. There are reliability and accuracy aftermarket components that will make the gun a 1 hole gun at 15 yards without giving up on reliability. The trigger on a 1911 sets the standard that all others are measured by.

5 Pointability- How quickly and smoothly does the gun come on target when drawing from a concealed holster? I contend that nothing will come on target faster or smoother.

6 Fit and finish- I have found very few Colt 1911 or clones that had poor fit and finish. The guns are very easy to deburr to make them easy to present without catching on clothing. They are trimline.

7 Parts availability- There is nothing worse than a pistol needing a part and having it sit in a shop on a gunsmiths bench for 6 months. Most decent gunsmiths have enough 1911 parts ( http://goo.gl/crd5Ez ) on their bench to build one or two guns. If not, availability is overnight.

8 Resale- A Colt or Colt clone continues to hold its resale value long after the enjoyment of owning it is done. We have seen Colts that have increased tenfold over a ten year period….Hard to argue with success.

9 Cost to maintain- You can buy a spare magazine for 14.00 or cheaper ( http://goo.gl/U8qSU9 ) for GI issue. Other parts are inexpensive as well and readily available for sale in any gun shop. I can’t say that about many guns. This gun is easy to breakdown and clean. If you have a decent knowledge of the gun, you don’t even need tools to take the gun down for a thorough cleaning.

And last but not least, without starting a caliber war……….38’s, 9mm’s and .40’s may expand on impact but .45’s never shrink in size……Almost all ballistics test state that (name your caliber) doesn’t give much in the way of expansion or penetration to a .45.

Because the .45 is the standard that all others are measured against. And if you are still a believer that the 9mm is just as good. Great, Colt and others make a 1911 platform for you in 9mm and .38 super.

Why I carry a Colt Officers Model from a crusty old Marine Veteran PMI.